Cleansing the mind: the ritual of yoga

I would not know if everybody relates to yoga this way, but that is how it was conceptualised. That the diseases of the mind were primary diseases (according to Yoga Vashishtha) and the body's diseases were secondary. Which may explain why the body is susceptible to cure faster today with modern day medicine than the mind!
That all aspects of yoga -- meditation, pranayama practices, asanas even were to  clear the debris left by the mind's hyperactivity. Perhaps most rituals in any movement has the same value. Even in the armies around the world rituals may have this purpose. For those who connect with yoga as a cleansing ritual, it is difficult to miss a day's practice. To miss practice would be to feel unclean.

A clean mind is where the divine lives. More than in the external places of worship. Yoga internalises the idea of the divine and constantly requires you to be pure of purpose. 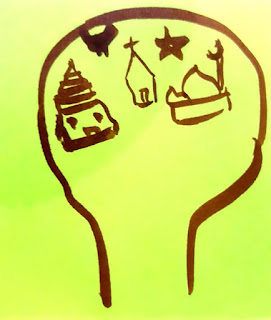 Here is a story I had once tracked, for a column I wrote, on the connection between practice and cleanliness of the mind space.

This story is credited to Sri Ramkrishna Paramahamsa. He told the story of a young man called Padmalochan who found a decrepit temple. Bats had started living in it, there was not even an idol in it. Padmalochan blew his conch, trying to get people interested in the temple. One wise man stepped up to him and said, "You blow the conch. But in this temple how can the deity reside where eleven bats have constantly defecated." Sri Ramkrishna's stories were often simple accounts with a parallel meaning. Here the eleven bats alludes to the eleven indriyas which are divided into two -- jnana and karma indriyas --   five sense organs, five organs of action, and the mind itself. Here he is implying that these indriyas, by their constant outward movements, defile the mind space. This mind space must be pure and involuted or inward-directed before it can be consecrated as a temple or seat for the ultimate divine. Yoga says that these outward bound indriyas must first be reined in by the purificatory yogic kriyas, which in turn purify the nadis, the inner energy channels. The body has to be purified, so the mind can be lead into purity.

Posted by YOGA IN EVERYTHING at 7:39 PM

But our experience of a stable outside world is a consistent illusion that the brain creates. It is an illusion that has been `designed' long before we arrived on earth, for the purpose of biological survival. The illusion begins at the first neuron. Our senses grab only a little of reality; the eye takes in a trillionth of the energy which reaches it, the ear similarly. So, our experience of the world as stable is so because of the way the brain is organized, not because of the way the world is.

From The Healing Brain, by Robert Ornstein and David Sobel. Wanting to reform the world without discovering one's true self is like trying to cover the world with leather to avoid the pain of walking on stones and thorns. It is much simpler to wear shoes.
Sri Ramana Maharishi Go here for More Ramana. For the original site on him visit http://www.ramana-maharshi.org/